As someone with family (three kids under the age of 8), who just spent multiple days without power in Austin and eventually resorted to heating their home with the burners on their stove, please know that I am not belittling the suffering that is happening in Texas right now. It is an epic tragedy.

However, we would be wise to remember the classic John F. Kennedy quote: “The Chinese use two brush strokes to write the word ‘crisis,'” he told an audience in 1959. “One brush stroke stands for danger, the other for opportunity. In a crisis, be aware of the danger — but recognize the opportunity.” Now, it turns out that he was probably reiterating a poor translation of the Chinese, but I don’t think that matters much. 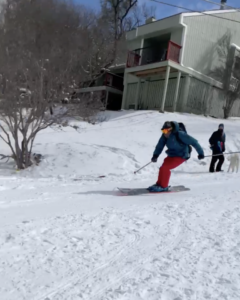 My cousin’s neighbor skis down an Austin street this week.

In general, I believe it’s true that crises present opportunity. Most obviously, there is the opportunity to learn about oneself and one’s community and how able one is to handle that crisis. There is a lot in that alone. More importantly, though, there is the opportunity to create a situation where it will be less likely to happen again. What do we learn, what do we do differently, to ensure we don’t find ourselves in the same crisis going forward? If you can help answer that question, there’s likely opportunity for your business, as well.

And I don’t mean this in a way that is tantamount to price-gouging. It just might be that the 3D data capture industry, for example, has solutions the state of Texas (and the energy industry in general) really needs — and the ice storm has put this in stark relief.

The Problem with Cold Natural Gas

The thing is, Texas sort of knew this was going to happen. They had a similarly bad storm in 2011, which caused similar rolling outages that luckily weren’t as bad as this week’s, and the Electric Reliability Council of Texas (ERCOT) identified ways for power generators and distributors to winterize. It just sort of didn’t happen:

It is possible to “winterize” natural gas power plants, natural gas production and wind turbines, experts said, which prevents such major interruptions in other states with more regular extreme winter weather. But even after upgrades were made after the 2011 winter storm, many Texas power generators have still not made all the investments necessary to prevent these sorts of disruptions happening to the equipment, experts said.

I’ll leave it to others to comment on why those upgrades weren’t made, but it’s clear there’s a problem in need of solving. Some certain percentage of the natural gas infrastructure in Texas needs to be upgraded and it’s fair to say there will be significant public demand at this point to make sure that it’s done. Particularly if this relatively unregulated sector wants to keep itself relatively unregulated, they’re going to be doing some investing in resiliency.

How 3D Can Help

If the energy sector in Texas is looking to make facilities upgrades, now is the time to make sure they understand the value of having 3D scans of their operations. If these plants and mining operations don’t have 3D renderings of their pipelines and physical plants, they should absolutely commission them as step one in this process. Everything will be easier from here on out if they do.

The answers to all of these questions lie in a good quality scan and 3D rendering of the facility.

Looking to triage the winterizing of a pipeline? Well, a 3D scan can help you identify which portions of the pipeline are most exposed to the elements vs. sheltered in some way by a building or heat source. Looking to create a work plan? Here’s how to use a 3D rendering to map out the most efficient way to allocate people and materials? Want to tell the public about the amazing upgrades you’ll be doing? What better way than with a fly through that highlights portions of pipeline that will be winterized.

If you’re in the business of scanning plants, mapping pipelines, and supplying 3D as-builts, you should be getting yourself in front of facility operators in Texas. They need you. And the opportunity is now.