Yes, folks, it’s true: Infrastructure Week finally happened. With the rollout of the American Jobs Plan, a $2T proposal from the Biden Administration, American infrastructure is now front-and-center in the mainstream political conversation in the United States. Regardless of where you fall on the political spectrum, I’m here to tell you one thing about this ambitious package: It should really be a boon to the 3D laser scanning community.

Now — literally right now — is the time to see if a GSA Schedule is right for you (it makes getting government contracts much easier) and to reach out to each and every contractor or construction firm of any kind to make sure they know you’re available for work. Because if this thing passes (and it probably will), it’s going to be all-hands-on-deck for the foreseeable future. You really don’t want to miss out.

What do I mean? Just take a look at what’s in this package:

The President’s plan will modernize 20,000 miles of highways, roads, and main-streets. It will fix the ten most economically significant bridges in the country in need of reconstruction. It also will repair the worst 10,000 smaller bridges, providing critical linkages to communities. And, it will replace thousands of buses and rail cars, repair hundreds of stations, renew airports, and expand transit and rail into new communities.

Will American bridges finally catch up with the innovation we’re seeing overseas?

Do you think they might need some survey work for that? Ten. Thousand. Bridges. That’s a lot of bridges! Trying to do all the work required to get existing site conditions for all of these projects via traditional survey means just isn’t feasible. They’re be prioritizing quick turnarounds. This is where 3D scanning, and especially mobile scanning, can really shine (check out this webinar if you need a refresher on the value proposition).

Make sure your TopoDOT licenses are in place and practice your skills in creating DoT-style documentation and deliverables. That’s where the money is going to be! There is $621 billion in funding for transportation infrastructure alone. That’s big cash.

Or how about this: 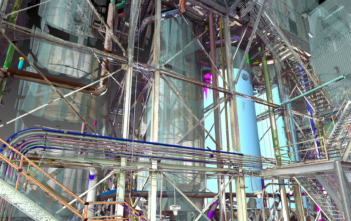 Time to bone up on your pipe fitting!

I mean, why not just say, “We’re going to do a whole lot of work that demands the use of laser scanning to document pipelines and identify existing conditions so we can design the expansion”? You might want to update your copy of Revit MEP, too. Don’t let projects like this create a whole new body of infrastructure that’s documented only with line drawings!

There’s $111 billion in their for drinking water piping and infrastructure.

Oh, and they’re going to need a whole lot of existing conditions surveys for this kind of work, too:

At least I hope they’re not going to rely on the original drawings as they begin all of these expansion and retrofitting projects. You have to let them know that job one needs to be a documentation of the current as-built environment so that these projects can be done quickly and efficiently, without a bunch of on-site cutting and accommodations for undocumented renovations and additions.

Perhaps the USIBD should get ready for an influx of new members!

Only laser-scanning and BIM can ensure an undertaking of this scale doesn’t get mired in costly rework and project delays. While many construction and engineering firms may still be resisting 3D documentation and design, you have to work with them to let know that 3D reality capture and design is the only way they can be competitive in a feeding frenzy like this. You’re their partner for incredible opportunity and growth!

There’s $213 billion in the plan for these kinds of retrofit and new-build projects.

All in all, this is the kind of public investment the United States hasn’t undertaken in decades, though some may remember the stimulus funds that Obama released after the financial crisis and the infrastructure mini-boom that resulted, creating a lot of work for the scanning industry at the time.

But 2009-2010 was a long time ago. The technology has evolved significantly since then. Now is the time to make a renewed effort to work with government contractors and departments of transportation and the construction industry to emphasize the value of 3D laser scanning and how vital it is to an efficient deployment of these kinds of massive investments.

So, polish up those case studies. Call up old acquaintances in construction and engineering. Make sure your web site reflects the breadth of your work and the return on investment. Don’t wait until the projects are already underway, when you’ll be scrambling to keep up.