The idea of a “digital twin” – a living, constantly updated and analytical representation of an asset, building or system – has been gaining momentum. As IoT sensor technologies improve, cloud computing becomes more robust, and companies realize the power of applying machine learning and AI, the future of the digital twin seems bright.

At the Geo Buiz Summit in Monterey, CA, SPAR 3D Executive Editor Jeremiah Karpowicz moderated a panel discussion to talk about what’s new in digital twins, and what is still left to do. Joined by Alexandre Pestov, CEO and Co-founder of vGIS and Igor Starkov, CEO of Ecodomus, Inc., the panel went through the evolution and the future of digital twins, and some of the challenges that need to be overcome.

What are the characteristics of a true digital twin?

Part of the difficulty of discussing digital twins is that many people have different ideas of what a digital twin represents to the panelists, it is a combination of a 3D model, living information, and a system of inputs that provide up to date data that can be queried, modeled and analyzed. Pestov says that what comes to mind when people think of digital twins are often just complex 3D models, but to him, that is not all they represent.

By combining the structural model with inputs that provide data at regular intervals, the digital twin of an asset like a building or even a city can provide data that is both up-to-date and actionable. Adjustments to building environmental controls or street light traffic patterns can be based on digital twin data – as long as the data that is being fed into the model is close to reflecting the real world. 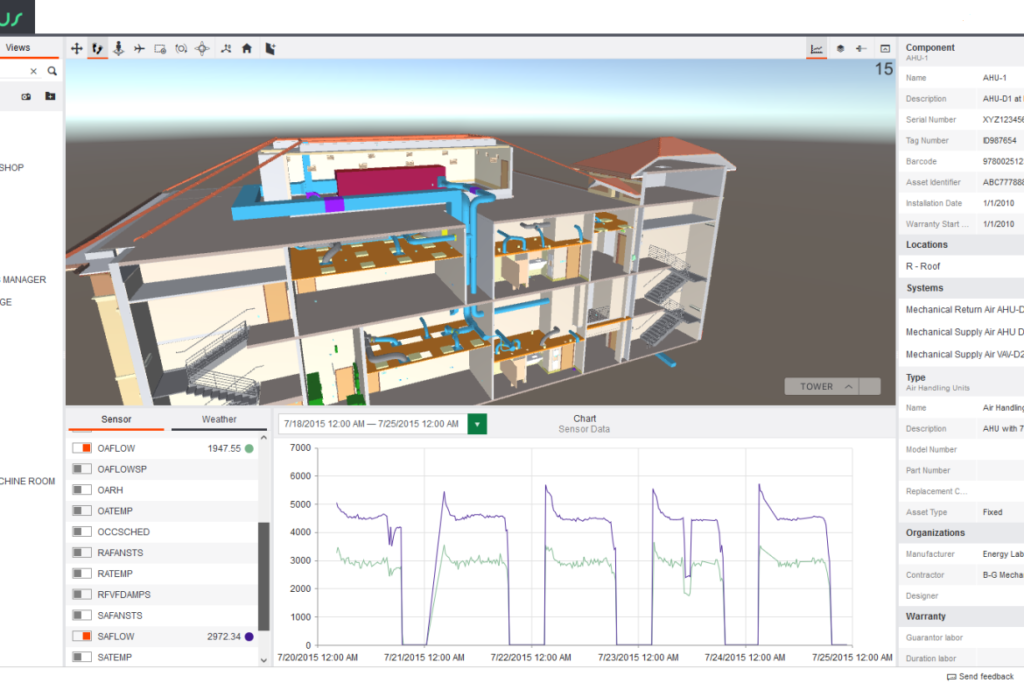 The process of 3D scanning can be a component of creating digital twins, with scans being updated as buildings are constructed, for example. But the visualization of the scans is just the starting point of building a digital twin. When showcasing a digital twin of the Sydney Opera House, Starkov stressed that it is not only the visuals that make a digital twin.

“What it looks like is that it is a virtual replica of the actual physical structure, but it is more than that. It is something that you can query and get a response back. What are the assets there? What are the properties of a particular location? What documents are linked to that location? What open work orders are there? What’s the temperature? How many people are in the room now?”

“All of that information is what we understand as the digital twin, and now it becomes an intelligent visualization.”

Where are digital twins being adopted?

“We’ve been around or about 11 years, and for the first eight years we were using the terms ‘BIM for facility management’ or ‘BIM for asset management’ and only a couple of years, we started using the term digital twin,” shared Starkov.

The idea of digital twins is not particularly new, but in the last few years, companies like Bentley Systems have realized the value of ‘digital twins’ as a way understanding reality, especially in the built environment. According to Starkov, the industry has also begun to apply the term across a variety of verticals, even beyond construction and architecture.

“It doesn’t really matter how it got there, it is about whether people started accepting it – and we are definitely seeing that the industry has started accepting it. One of the key advantages is that the term digital twin can be taken outside of the architecture, engineering and construction industry… and now it is at a much broader acceptance.”

The growing adoption of Building Information Models (BIM) combined with IoT sensors, better lidar scanning has also contributed to digital twins going more mainstream. However, this is not happening evenly globally, just as the adoption of BIM has been better or worse in some places, says Pestov.

How are digital twins being integrated into workflows?

Sensors can play a large part in the utility of a digital twin, and as they develop and are more widely installed, things like predictive analytics are possible.

Pestov shared a case where Microsoft had developed a digital twin for a transportation company in Europe, where the sensors could identify and predict vehicle maintenance issues through the use of connected sensors while they were on the road. That data could then be used to predict when an affected truck would possibly fail, and then automatically link up to parts procurements to order the parts needed for repair and schedule the driver to come in for work. The system could even make the appointment with the mechanic, arrange to replace the driver if needed, or even find them overnight accommodation while the repair is completed.

Pestov says that the same types of examples can be applied to the construction industry as they adopt new sensors and connect their systems.

“We work with companies that put sensors into manhole covers so that they can detect chemicals directly into the manhole, which can be fed into a whole network. It can create purchase orders, work tickets, and direct people to change the work schedule for the next few weeks.”

The challenge to this type of integration is that, at the moment, it tends to be fragmented. Use cases are being developed in relative isolation from one another. Organizations like the Open Geospatial Consortium (OGC) are hoping to facilitate better standards for sharing data, and Microsoft and other cloud providers are hoping to create platforms that could hasten the integration of these individual digital twins. Both panelists seemed hopeful that a more integrated future for digital twins is well on its way to becoming reality.