Artec 3D has made this type of upgrade a reality with the latest release of their Artec Studio 15.1. As a company who both develops and manufactures professional 3D scanning hardware and software (down to manufacturing their own electronic components), Artec 3D has been providing their customers with regular upgrades via software releases semi-annually. This latest release, however, moves beyond additional features to fundamentally changing the scanner’s resolution and output – without changing the hardware.

By utilizing deep convolutional neural networks to reconstruct 3D surfaces, Artec 3D has introduced an ‘HD Mode’ into Artec Studio 15.1. With HD Mode, users can create exceptionally accurate, low-noise scans of smaller and more detailed objects (as well as large intricate objects) using the Leo or Eva scanners that they already own. The HD Mode is available now for all of the Eva and Leo users – free of cost – which was important to Artyom Yukhin, President and CEO of Artec 3D. 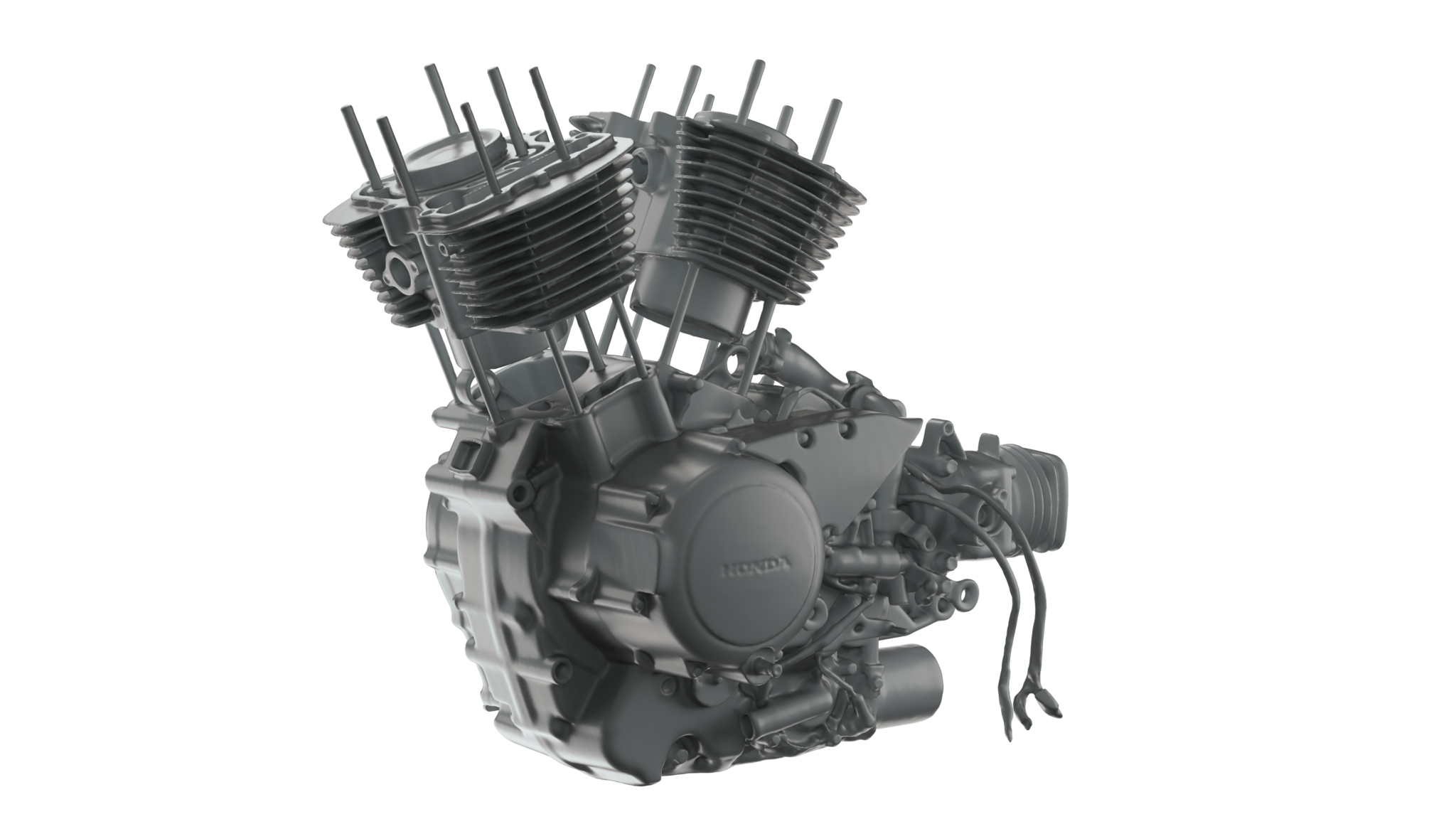 A scan of a Honda engine captured in the new HD Mode.

“The release of HD mode, powered by a first-of-its-kind neural network, is an extraordinary milestone for the 3D scanning industry that our users can benefit from right away. It’s incredibly rare for any company to release such a significant upgrade at no cost, but we want users to rest assured that when they invest in our technology it will continue to pay off for years to come.”

Depending on the model and settings, the neural-network powered reconstruction can receive up to 64 times the measurements from the same scanners, and more than doubles the resolution of the final model while significantly decreasing noise. An Eva or Leo operator can select the desired density for HD scans, from a standard 1X all the way up to 36X for Eva and 64X for Leo.

Even complex structures with various hard-to-scan surfaces, such as those featuring holes and gaps, varying depths and angles, and recessed areas are now systematically reconstructed in every single frame to deliver the best possible scan. With HD Mode, tricky surfaces, such as those that are deep black, shiny, or covered in hair or fur, are also easier to digitize with incredible detail. HD mode has a better level of noise reduction in both raw data and final model, making scanned objects ready for reverse engineering, as well as many other applications, without needing any editing. By reducing the time needed to clean up the reconstructions, this update should save a considerable amount of time as well.

“With the help of in-house developed training techniques and convoluted neural networks, we’ve managed to squeeze more information from the same amount of data captured from our existing 3D Eva and Leo scanners and get a much richer and denser representation of the scene being scanned.”Gleb Gusev, cTo of artec 3d

This resolution advancement is unique in two ways – first, that neural networks are employed to better an already robust algorithm for 3D processing of data, not just a little bit of machine learning. The second is that it is focused on an often overlooked step in 3D scanning: reconstruction. Between the scanning and the classification, software needs to rebuild what it sees into the 3D image and shapes by interpreting the measurements the hardware collected. By focusing on this step, the data can be strengthened and made more accurate even before it is processed in further workflows. The only downside to focusing on reconstruction for this update is that scans that were previously reconstructed before the update cannot be reconstructed in the new mode – so the HD mode will be able to be used for all scans going forward, but not retroactively.

Gleb Gusev, CTO of Artec 3D said that leveraging neural networks has allowed them to make the change without having users update the hardware.

“With the help of in-house developed training techniques and convoluted neural networks, we’ve managed to squeeze more information from the same amount of data captured from our existing 3D Eva and Leo scanners and get a much richer and denser representation of the scene being scanned.”

“Because we project a pattern (e.g., structured light) that is distorted by geometry, it can be distorted in any possible way, and it is quite hard for a developer to engineer the algorithms to be accurate enough or that wouldn’t be biased in a certain way. By using deep learning / deep neural networks, we are able to achieve quite clean construction and also a very unbiased one – so I would say you are able to get almost an order of magnitude better data.”

Another secondary impact of this change, in addition to the instant increase in detail and accuracy, may change the ways in which companies work with Artec’s scanners. Instead of relying only on experienced and well-trained professionals to perform scans in optimal conditions, this upgrade can empower workers at all levels to perform scans without a worry that they will be of lesser quality when reconstructed. This may serve to broaden the users and to further democratize the process of scanning for a variety of industries.

“We are committed to creating life-long Artec 3D users, not only by developing the industry’s most cutting-edge new 3D technologies, but also ensuring that the performance of our existing solutions is continuously being enhanced,” added Yukhin.