On the recent SPAR 3D webinar, Kevin Dowling, CEO of Kaarta made a surprise announcement: Kaarta has a new SLAM-based mobile mapping sensor – The Stencil Pro – and its unlike anything we’ve seen previously in the SLAM scanners.

The Stencil Pro is a versatile and professional-grade mobile mapping platform – designed specifically to get with excellent measurement and visual fidelity. Equipped with integrated SLAM-based mapping, 360° color, and the ability to input GNSS to enhance positional fidelity, the Stencil Pro seems to have carved out a new category for mobile SLAM scanners. Kaarta, who have been innovative in their applications of SLAM and have invested in developing advanced cloud processing, have designed the sensor to be as versatile as possible.

The Stencil Pro is equipped with a 32-line, high density, low noise lidar with a range of 120 m, and a data rate of 600,000 points per section. Added to that, a 360° horizontal and 40° vertical field of view delivers flexibility for great scans when indoors our outdoors. 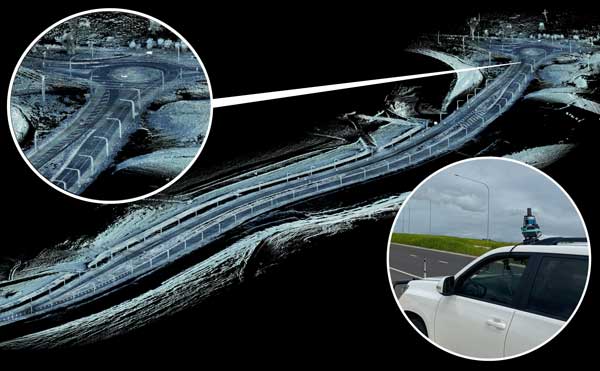 The all-in-one system can scan, process, and view data captured in real time, and offers panoramic 4K imagery and colorized point clouds. The quality and density of the colored clouds is even high enough to be used for visualization and feature tagging.

Integrated GNSS – not an add-on 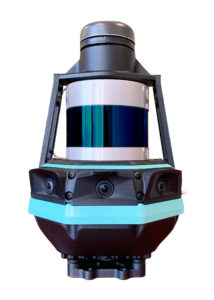 Like all Kaarta systems, Stencil Pro’s simultaneous localization and mapping (SLAM) capabilities means it can operate in GNSS-denied areas such as indoor, underground, under canopy, or in urban canyons. However, it is also fully geo-enabled for the many applications such as street, corridor and rail mapping where the addition of a GNSS signal is beneficial. The combination of GNSS and SLAM helps to increase the speeds at which mobile scans can take place, and can also help address SLAM’s inherent drift.

The onboard GNSS and color cameras are fully integrated into real-time capture, allowing for optimization of collected data as well as flexibility in output. The advantage of absolute positioning and accuracy coupled with 360° imaging technologies produces a true color, rich and robust point cloud when needed. If a colorized point cloud is not required, or GNSS is not available, reliance on the other sensors is seamless.

CEO of Kaarta, Kevin Dowling, said that the integration was the driving goal for the Stencil Pro.

“From the beginning we wanted to make this a seamless product.”

While there have been iterations of GNSS-enabled SLAM scanners, including their own Stencil 2, this full integration of SLAM, color, and GNSS is novel in that they are all integrated in a single tool rather than as ‘bolt on’ or add on solutions, adds Dowling.

“For the Stencil 2, we could get GNSS, but only as an add-on. It worked – and continues to work – fine, but with Stencil Pro… the point of fact is that it is integrated not just form the design standpoint but from the technology standpoint.”

Stencil Pro integrates the Trimble BD-990 receiver, AV28 antenna and PPK GNSS correction. It supports NTRIP and a range of other third-party GNSS antennas. GNSS data is collected and used in loop closure to align and geo-register, further enhancing the fidelity of large-scale scans and long, linear scan paths.

In addition to its versatility in terms of geolocation, the Stencil Pro has also been ruggedized, earning an IP65 rating. This protection can extend the range of environments that would typically be suitable for scanning, which opens up the potential for more users across broader verticals. The Stencil Pro is protected from damage caused by dust, dirt, fog and rain, which can also mean that there are fewer days of downtime if the conditions are not perfect to use more sensitive equipment. These protections make it appropriate not just for empty streets, but in tougher environments like mines, forests, earthworks, construction sites and other challenging infrastructure environments.

The power for the Stencil Pro is provided by either 100-240 VAC input or using its two hot swappable batteries which last for 3 hours of scanning. The unit is able to be mounted to a vehicle, automated capture solution, or carried by hand.

In addition to preparing the Stencil Pro’s hardware for challenging conditions, the software and user interface has been designed to facilitate capture and keep the process simple. The user experience includes one-button scanning (with a simple push-button stop for handheld scans) and streamlined post-processing options. There is also real-time scan monitoring that can help ensure quality scans while on site, rather than waiting to get back to the download to see an area that has been missed. It is also possible to remotely operate the device with a touchscreen monitor, which means that the scanner can be mounted on vehicles that might not be easy to physically reach.

“Obtaining up-to-date data for these environments is laborious, time consuming and expensive with current methods. Even in highly challenging scenarios, Stencil Pro rapidly provides the answers needed for managers to make informed decisions.”

An early access program has been launched for those considering using the Stencil Pro, and Kaarta plans to ship limited quantities out in June.

Those interested in being considered for early access to discuss a specific application, schedule a demonstration or review sample data sets can apply for the Stencil Pro Early Access Program.