Carlson Survey, CADnet, and GIS are individual modules that are all part of the Carlson 2021 family of software products that run with AutoCAD and IntelliCAD. The family also includes products for civil engineering as well as mining applications.

Carlson Survey is an application for professional land surveyors that allows them to process their data seamlessly between the field and the office and create their deliverables accurately and efficiently. CADnet is a module that allows users to create CAD from non-CAD documents such as PDFs, raster images, and paper plans, generate CAD text from raster images, and to import or export BIM into CAD. Carlson GIS provides tools for GIS mapping and geo-referenced images. These tools include data capture and linking, data labeling, import/export of GIS databases, polygon topology creation and analysis, and supports working with Esri.

Carlson 2021 comes with the power of IntelliCAD 10, the newly-released update to the CAD platform that brings increased speed, new features, and a fast, efficient new user interface for Carlson users, and is also compatible with AutoCAD 2017-2021. The 2021 release also delivers powerful new integrations with Carlson’s photogrammetry solution, PhotoCapture, as well as the ability to insert and manipulate BIM models in a drawing.

In Carlson Survey, you now have the ability to directly browse Carlson PhotoCapture projects and download the results, including TIN surfaces, coordinate files, point clouds, and images. PhotoCapture, Carlson’s photogrammetry solution, generates common image and surface file formats, including orthomosaics in GeoTIFF, .jpg and .png formats, DEM in GeoTIFF, .jpg, and .png formats, point clouds in .las, .xyz, and .ply, 3D mesh in .ply, .obj, and .glb formats, contours in .dxf and GeoTIFF formats, as well as an accuracy report on data in PDF form. PhotoCapture can also create volume calculations and distance measurements, and includes easy visualization of 2D and 3D models in any web browser.

In Carlson CADnet running on IntelliCAD, users now have the ability to insert BIM models from Revit and IFC format into the drawing. This new process does not require file conversion, .rvt, .rfa, and .ifc files can be imported directly. This functionality opens up several more efficient workflows for anyone working on projects for which BIM models are being utilized. A new BIM properties pane allows users to select visibility for different categories in the model. They can also snap to points in the BIM model as well as draw new BIM objects including walls, doors, windows, stairs, and railings. 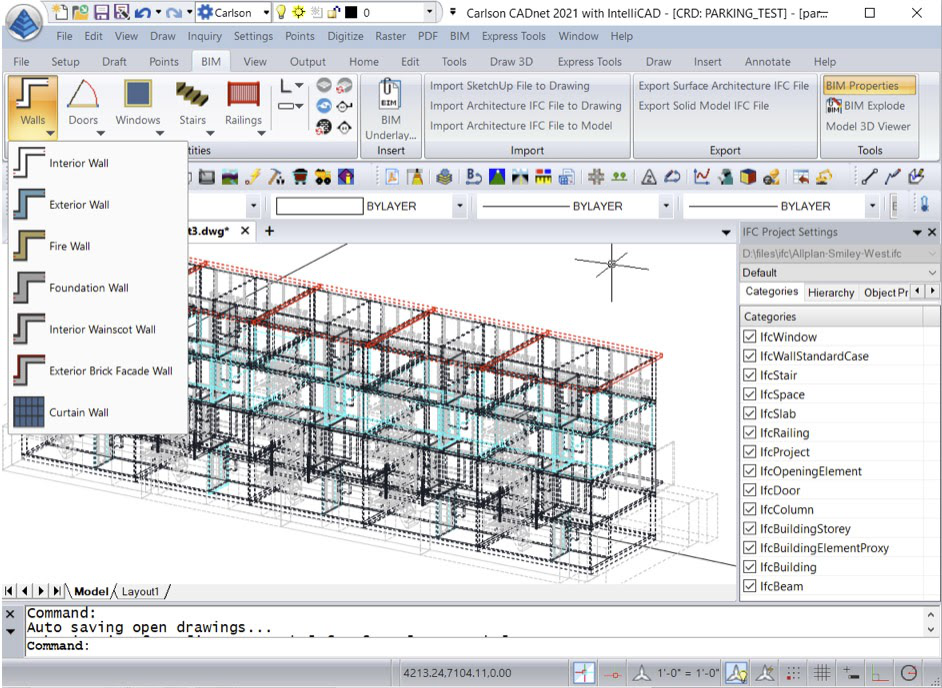 Integrating BIM into Carlson’s CAD offerings opens up several workflows for users. The BIM models can be placed into the drawing for visualizing the BIM model together with the CAD entities. As more projects utilize BIM and its inherent benefits, it has become an opportunity for Carlson’s survey, civil engineering, and construction users to also take advantage of the centralized, data-rich BIM approach by drawing directly from the design files instead of relying on an output provided by the architect or engineer.

One example of this would be for a surveyor or construction professional to take the exact model used by the architect and create the points or polylines required for construction layout or stakeout directly from that model. Included in Carlson CADnet 2021 are tools that allow the user to select specific portions of a BIM model that are relevant to their activity. For example, if a user were laying out the foundation of a building, they could select only the BIM categories for the lowest level of the building and hide everything else, or show only the structural foundation category, or they could select different views of the model to aid in creating the most accurate layout possible in the most efficient way.

In the Carlson GIS module, more databases are now supported including ODBC and ESRI File GeoDatabase, both of which store both geometric and GIS data. This new functionality allows sharing of files between Carlson and third-party software such as QGIS and ESRI ArcGIS. ODBC is an industry-standard API for database systems that enables Carlson GIS to support relational databases including PostgreSQL. For using the Carlson GIS module, ODBC and ESRI File GeoDatabase require not just GIS data, but also geometric information. Third-party software requires this combination of information, and since Carlson now supports these combined database types, it is now possible to create files compatible with software such as QGIS and ESRI ArcGIS.