While some remain focused on the developments for autonomous capabilities for driving on terrestrial roads, that is only part of the evolution of autonomous technology. Emesent, a drone autonomy company, has announced that they’ve made a major breakthrough in the skies – a Level 2 autonomous system for their flagship Hovermap program.

Emesent made news earlier this month for releasing a version of their plug-and-play payload for commercial drones that could now process colored point clouds, and have had a Level 1 autonomous capability for nearly two years. Emesent, however, has been continuing to push for autonomous tech that can also be used “beyond-line-of-sight” (BLOS). The Autonomy Level 2 (AL2) for Hovermap can operate autonomous functionality while out of sight of an operator, and in the absence of GPS where GPS is not available.

Moving to AL2 means the drone can self-navigate and avoid obstacles beyond line of sight, while being operated from take-off to landing from a safe distance. The system processes data on-board in real-time to stream a 3D map of the environment back to an operator’s tablet, providing instant and detailed insights into the surrounding area, as well as any potential hazards.

To accomplish this, Emesent has employed simultaneous localization and mapping (SLAM) technology that uses complex algorithms to determine the position of the sensor. This SLAM technology allows the AL2 flight system on compatible drones to fly outside of signal range for a typical drone, or to venture into areas that have not been previously mapped. 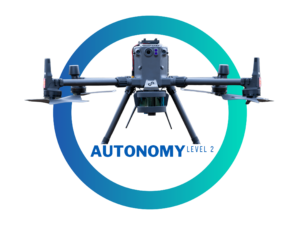 This level of autonomy comes with the ability to extend the reach (and thus, broaden the application) of drone technology for a variety of industries – everything from underground environments, hazardous conditions, and more remote locations. The AL2 technology is of particular interest to mining, civil infrastructure and disaster response. CEO and Co-founder of Emesent, Dr. Stefan Hrabar, said the development was significant for many industries.

“This is a huge step forward for drone autonomy and a massive benefit to industries like mining, civil construction, and emergency response. With the intelligence to navigate environments without a prior map, customers can use the system to carry out complex missions, secure the safety of personnel, and drive greater efficiency in their operations.”

In a press release from Emesent, the technology is described as based on a “decade of research” by CSIRO’s Robotics and Autonomous Systems group who specialize in 3D lidar-based SLAM techniques for achieving autonomous solutions.

AL2 is currently compatible with a number of DJI Enterprise drones including the new DJI Matrice 300 RTK. Emesent has worked closely with DJI to ensure close compatibility and integration of autonomous functionality such as AL2 with the drone’s flight controls. Further compatibility with other drone models is planned following the launch.

For more information on what the AL2 can do, visit Emesent’s website.