Hovermap is a new UAV payload from DATA61 and CSIRO that brings advanced autonomy, SLAM-based mapping, omnidirectional collision avoidance, and GPS-denied flight to drones. Though Hovermap was designed for use in complex industrial applications in the mining and telecommunications industries, it can be used for any application where users want to collect previously unavailable data in a safe, repeatable, and efficient way.

Currently in its beta testing configuration, the payload comprises a Velodyne VLP-16 Lite, a low-grade MEMS IMU, and an embedded computer. The commercial release will add three cameras, PPK GPS, and a long-range radio link for telemetry and real-time point cloud visualization. This commercial version will weigh in at 2.0 kg.*

The lidar is mounted in a manner that will be familiar to users of other products developed at CSIRO–it rotates to capture a spherical view. This means it gathers a lot of data on a single pass and requires fewer passes to map complex objects than fixed-orientation sensors. The spherical view also offers the data needed for an obstacle avoidance system–all without adding an extra sensor.

Dr. Hrabar explains that there are two different ways to deploy the Hovermap on your multirotor airframe. If your drone does not have a compatible autopilot system, you can deploy Hovermap as a mapping-only payload. In this configuration, the payload will perform real-time mapping, but lacks advanced autonomy.*

If your drone-mapping system includes a compatible autopilot, you’ll gain access to advanced autonomy. When you use the Hovermap this way, Dr. Hrabar promises “application specific autonomy” and “single click mission execution” in complex and dangerous situations. Send the drone on its way, and receive a real-time point cloud as the mission progresses.

(Note: Click on gallery images to see them in full resolution.) 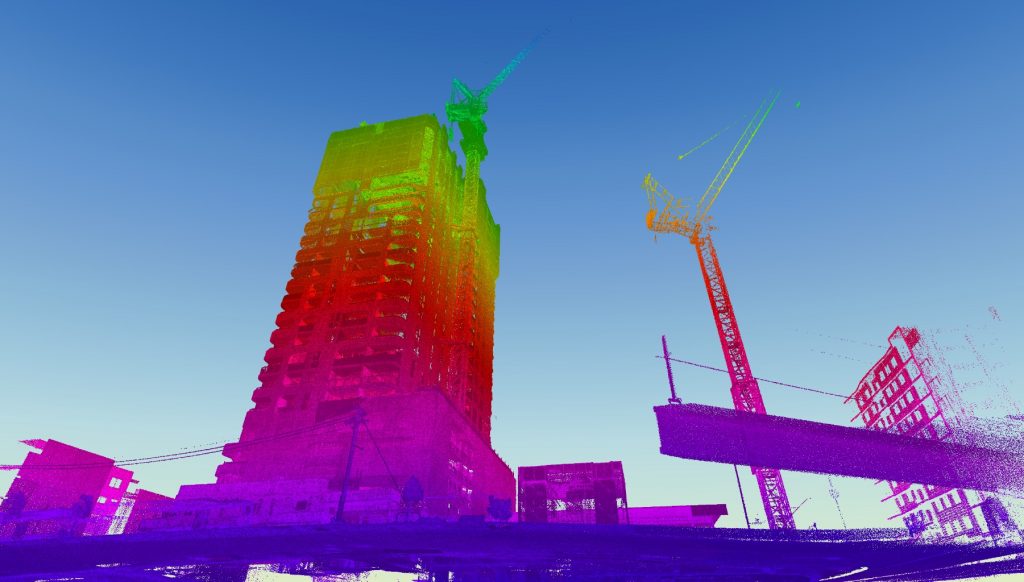 A Hovermap scan of a construction project in progress 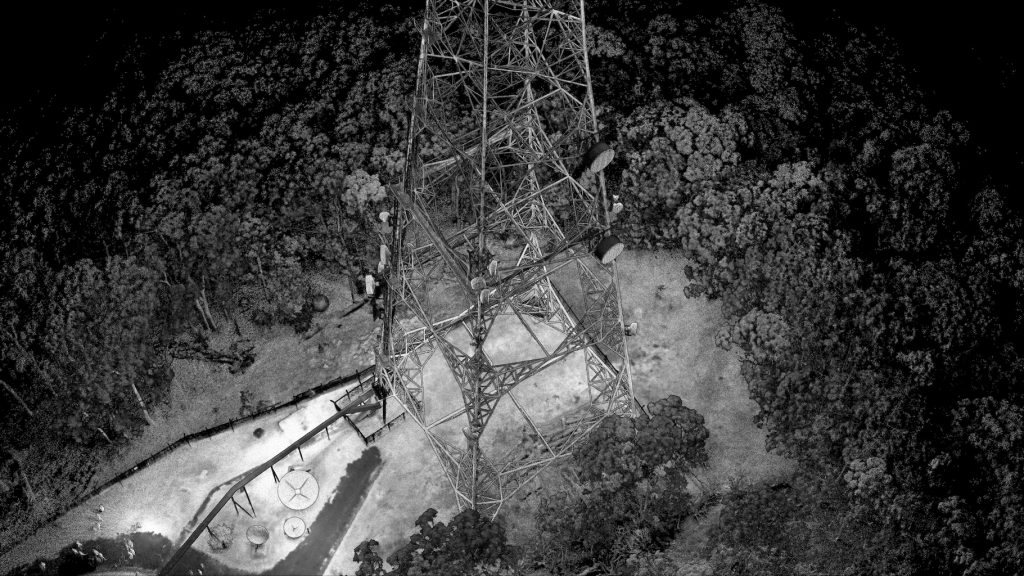 A Hovermap scan of a radio tower

SLAM and Autonomy, Together at Last

Perhaps the most noteworthy feature of Hovermap is that it uses SLAM technology to perform both autonomous navigation and mapping. It’s rare to see SLAM used for both purposes, Dr. Hrabar tells me, but since CSIRO and DATA61 have experience in drone autonomy and lidar-based SLAM, the developers were able to integrate these two functions so they work in cooperation.

Hovermap’s autonomy features help improve the SLAM results, and these SLAM results make for improved autonomy. How does that work?

Dr. Hrabar explains that the best SLAM requires flying the UAV in a certain way (“for example, at the right speed, at a suitable distance from the features, and having a transect overlap to close the loop”). An autonomy system that accounts for these requirements can ensure that the flight path produces good SLAM results.

“In turn,” he says, “having a good, robust SLAM result in real time ensures that UAV state estimate (position, velocity) is accurate. This accurate, robust state estimate is key for GPS-denied flight and other autonomy functions. The autonomy system can therefore fly the UAV in a way that produces a good SLAM result to help itself with autonomy.” 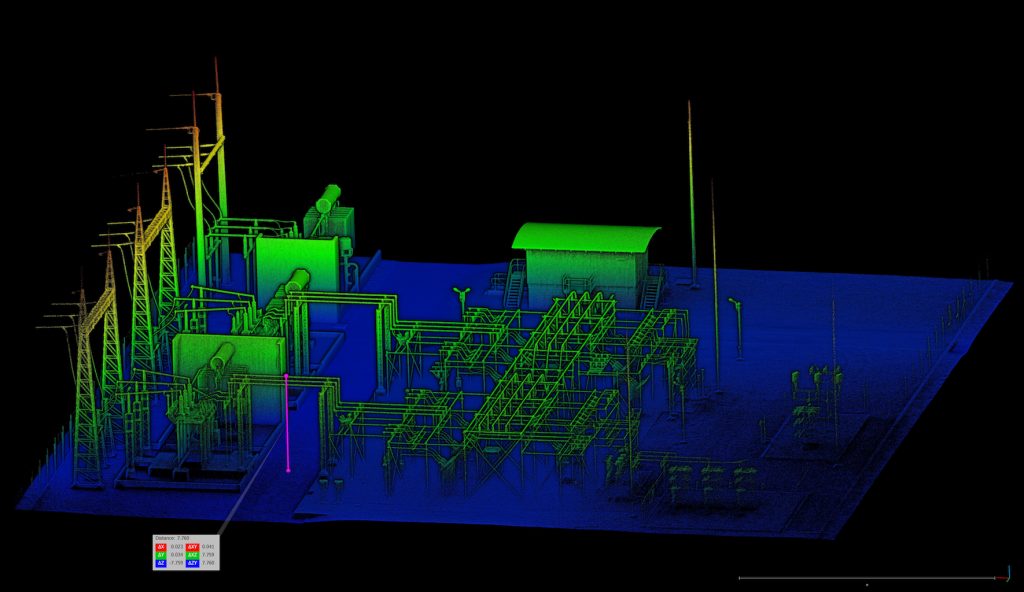 Cropped view of a substation scanned with Hovermap. 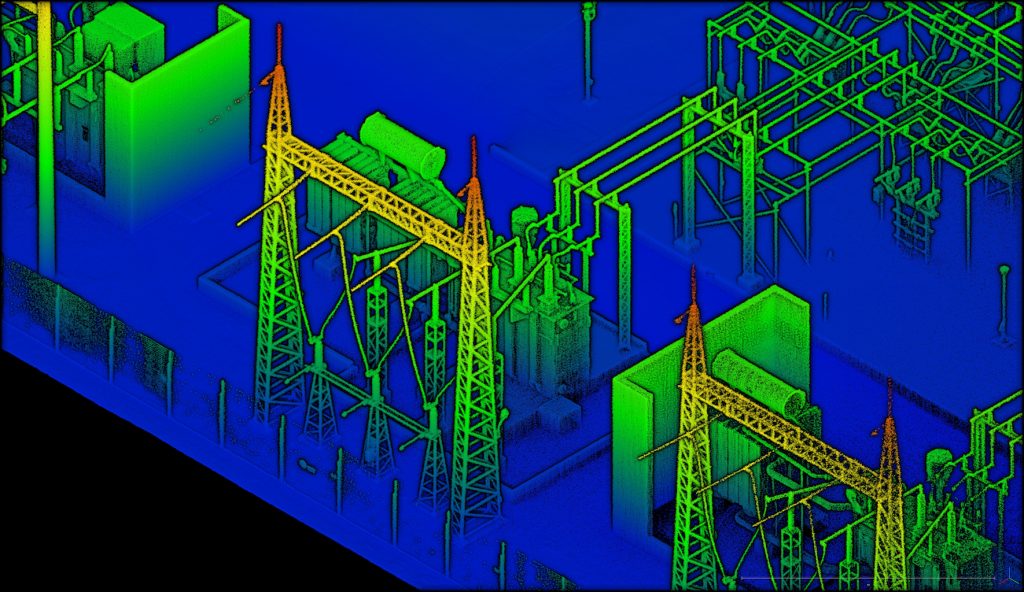 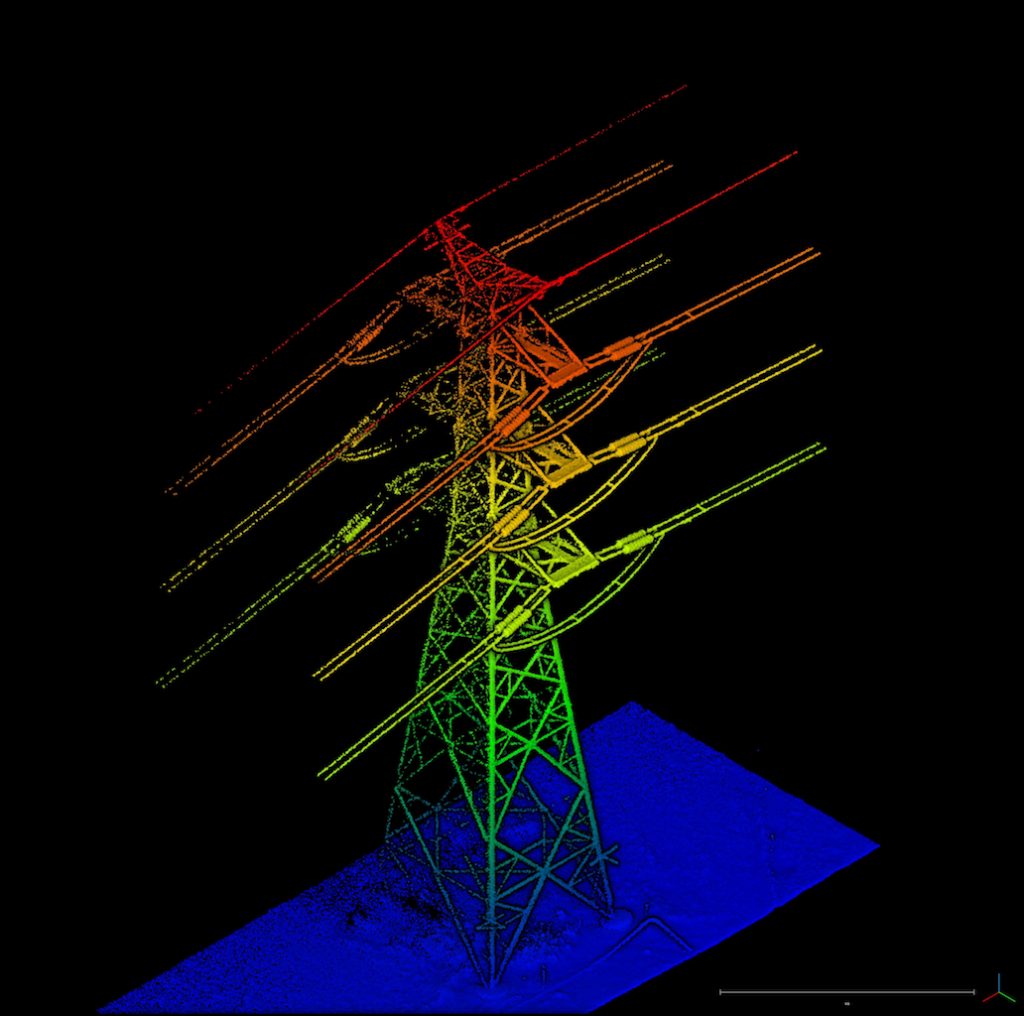 To explain the benefits offered by this moebius strip of autonomy and SLAM, Dr. Hrabar offers two examples.

If you’re flying a large tower to map and inspect it, he says, you might start at the top. However, “if the UAV is at the top, all the lidar will see is the tower because the ground is out of range. Similarly, if it flies too far away from the tower, it will not generate enough features for matching and the SLAM will slip. If the autonomy system understands this, it can keep the UAV within the optimal range of the tower.”

As another example, he says you could be mapping a large area where GPS is poor and you are relying on SLAM-based GPS denied flight. During this mission, if your drone “encounters a large body of water, it should not proceed over the water. Water absorbs the lidar, so there will be no returns and SLAM would be lost. The system should be able to detect this and navigate around the edge of the water body to ensure the SLAM solution remains good.” 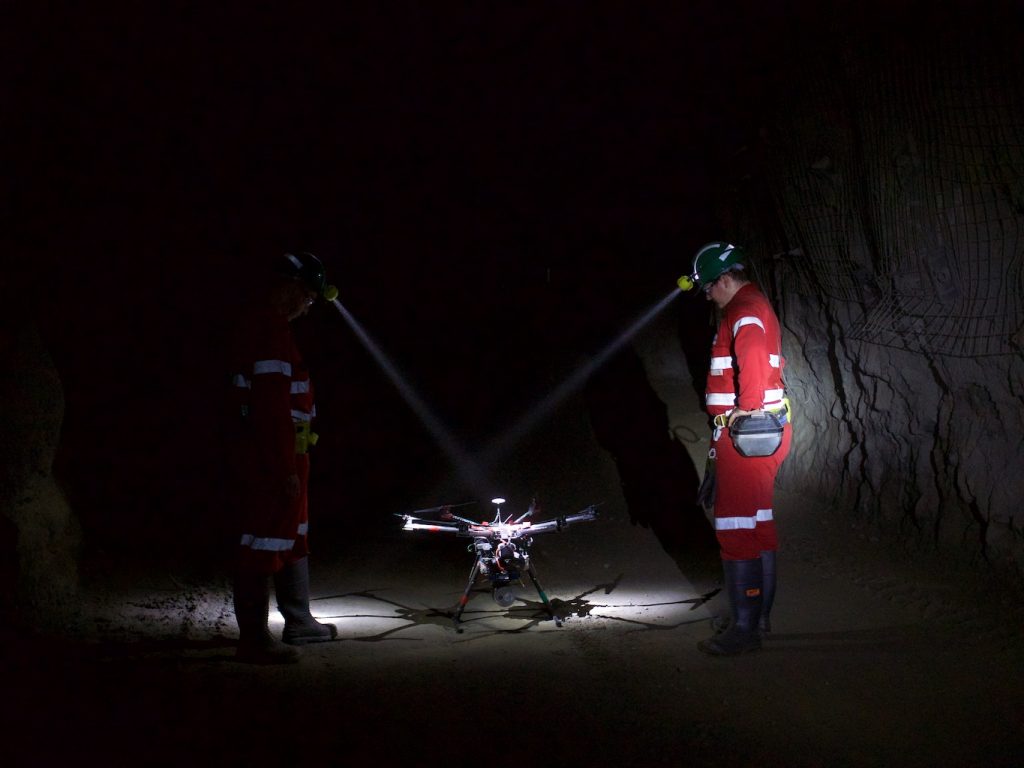 Using Hovermap in a mine 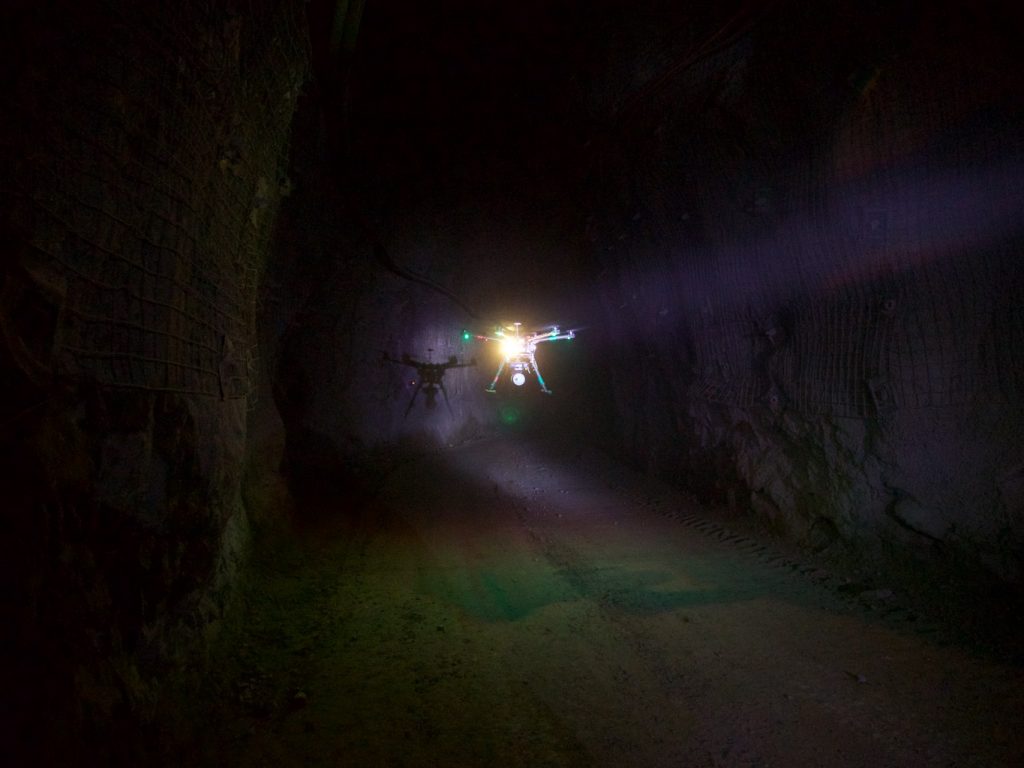 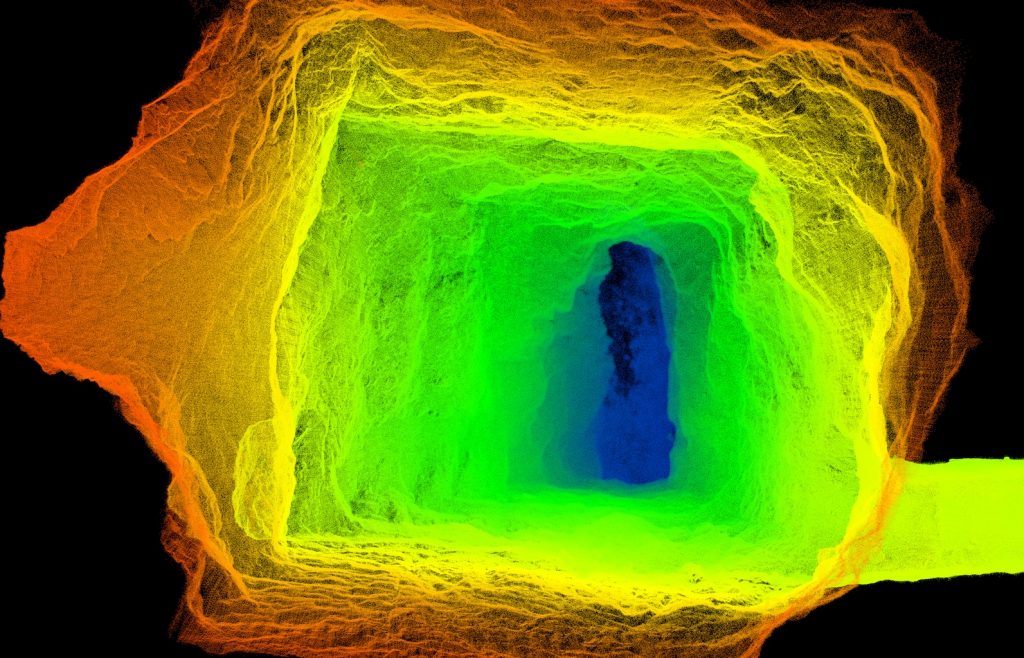 Point cloud of a mine stope

Though Dr. Hrabar reminded me that Hovermap is currently in beta testing, and not all of the features are currently implemented, the benefits of the payload are already abundantly clear. Compared to terrestrial lidar, Hovermap scanning is much faster and enables mapping of much taller structures. As compared to drone-based photogrammetry, Hovermap offers faster processing time (Dr. Hrabar says they’ll soon be able to offer a live view of the point cloud), and the potential for cleaner, better results.

Beyond that, Dr. Hrabar sees Hovermap improving efficiencies in existing applications and even enabling new ones. For example, he says the system enables a drone to perform fully autonomous mapping of mine stopes and other dangerous parts of a mine.

In fact, it can be used in any application where the drone needs complete autonomy “to explore and map a new area and then find its way out safely,” which would be very useful for mapping indoor stockpiles, warehouses, large liquid storage vessels, and even inspecting inside boiled for power plants. That means only time will tell how the market uses this powerful new solution.

Dr. Hrabar tells me that, though the technology is being developed under CSIRO at the moment, the team will be forming a new spin-out named Emesent Technologies to commercialize the technology. You can find more information at their website or YouTube channel.

* Corrections, 7/13/17: The piece has been updated to reflect the correct weight and functions of Hovermap’s forthcoming commercial version.