Subscribe Advertise Contact SPAR 3D Expo & Conference »
You are at:Home»News»Hardware»HoloLens 2 is here – and ready to get to work with SYNCHRO XR

Earlier this week, Microsoft announced that the HoloLens 2 – their “mixed reality” smart glass platform – is shipping and now available for sale. The much anticipated follow up to the original hardware has some significant changes, especially to the user experience. The $3500 HoloLens 2 that was announced at the beginning of 2019 will be delivered to preorder customers and available for purchase in the US, France, Ireland, New Zealand, Germany, Australia and the UK. 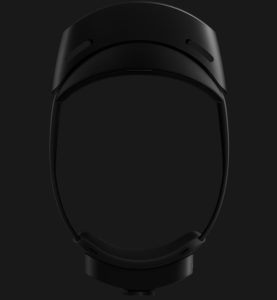 The balanced headset has a weight on the rear portion to feel more natural when worn.

It is worth reiterating that this platform is defined as “mixed reality” by Microsoft, a term that lays somewhere in between virtual and augmented reality. Instead of merely putting a layer of additional information over the field of view (augmented reality) or completely enclosing the experience in an entirely virtual world (virtual reality), the HoloLens 2 platform uses a semi-transparent hologram type of visualization. The wearer can see clearly through the headset to his or her surroundings, and the content is displayed in bright, yet not completely solid, 3D images.

While the upgrades in specs and processing are significant, they are not the most major change in the new platform. Microsoft aims to increase the day-to-day usability of the platform and to ensure a more natural and ergonomic experience.

When first putting on the headset, the system performs an eye-tracking calibration. The system produces a series of firework-like holograms in the periphery of the field of view that the user follows with their eyes. The process takes a short time to complete and requires no additional effort on the part of the wearer.

The field of view of the headset is impressive. The field of view is 52 degrees, whereas the previous HoloLens only offered 34 degrees. The headset has also been re-balanced for longer wearability, with the rear portion of the headset containing a bit more weight to balance the hardware on the front of the device. This offset is designed to prevent the neck strain that comes from a front-heavy system, with the hopes that it will increase the time that the headset can be worn comfortably. 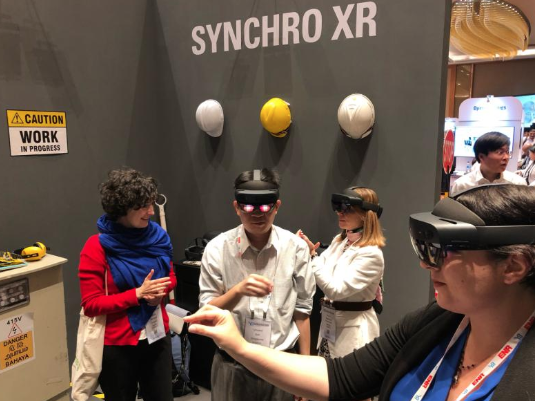 Experiencing the HoloLens 2 at the 2019 Year in Infrastructure Conference.

Another ergonomic improvement is its gesture tracking ability. Instead of requiring a specific gesture (the tricky-to-master “air tap” motion), HoloLens 2 allows for much more intuitive interactions. When a message and button appear in the field of view, one can reach out and push in the button – wherever that appears in space. You can also select and drag objects, and shrink and stretch them by grabbing onto corners. At a demonstration event during the Bentley Systems Year in Infrastructure conference, I had the opportunity to try out one of the enterprise headsets. After a few minutes, the controls felt pretty natural, and I didn’t have to overthink what I was to asked to do. Admittedly, it took me a moment to adjust to the idea of poking “thin air” to accomplish a task, but it was an easy adjustment once it sunk in. Additional controls are activated by touching a virtual button located on your wrist.

At the Year in Infrastructure, I was also able to preview the new platform and check out Bentley’s 3D modeling application built for the Hololens, SYNCHRO XR.

SYNCHRO is a tool for working with 4D construction models through time. The models are dissected and viewed through both time and physical space. A timeline slider can mockup the various stages of a project and help to identify any dependencies or clashes that may not be as obvious on project timelines or written plans.

In the XR version of SYNCHRO, users can experience the models in several ways. They can create a model that sits on a tabletop or in space, that can be rotated or even sliced to get a more specific view, and a timeline slider can be adjusted to go forward and backward in time of the project. In the Bentley Year in Infrastructure demonstration, a three-story space appeared in the air in front of us, and the slider showed the beams, walls, and ceilings being installed in order as the slider was advanced. 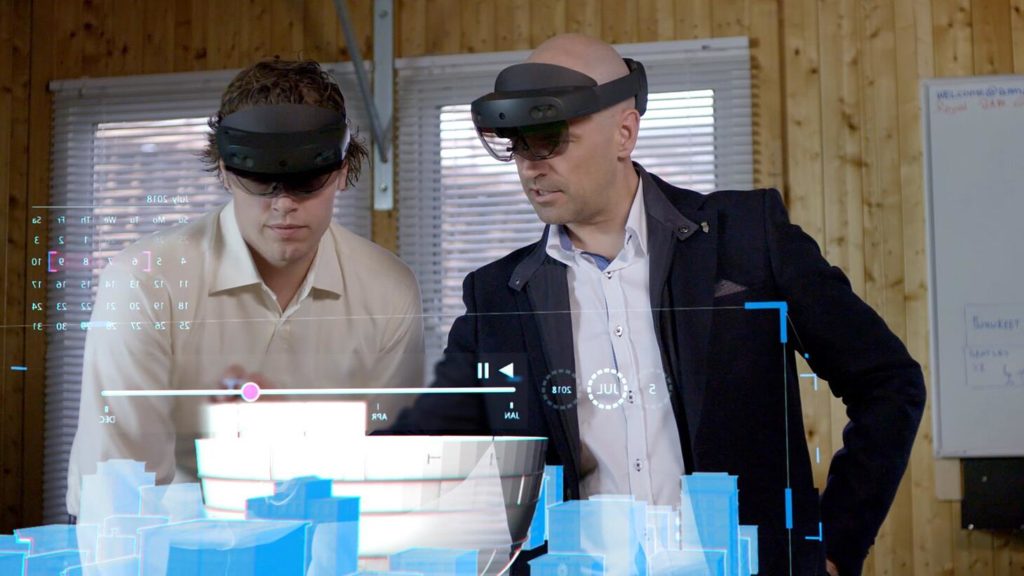 Collaborative viewing is possible with SYNCHRO XR on the HoloLens 2.

The model can also be experienced at human scale, where you can place yourself inside a room and look around. For this portion of the demonstration, the tabletop model was turned off, and suddenly the walls, ceilings, and pipes appeared in view. Elements of the model could be selected, color-coded, and annotated in a variety of ways – for example – by their status. The simple gestures are used to review, validate, track, or to experience the sequencing of the project first-hand.

A shared view is available as well, which could be particularly powerful for planning meetings. In the demonstrations, we saw individual instances of the model (so each of us could manipulate the model without interrupting anyone else). However, in a business setting, the model and animations could be viewed and interacted with in a multi-user experience, allowing for people to interact with it together and come to a consensus about issues or understand the schedule more fully.

Mixed Reality designed for enterprise use

When combined with the features that make the HoloLens 2 more usable – including its comfort and intuitive controls – it is easy to see how these could be rolled out in an enterprise setting. The rapid calibration process is well suited for companies that may look to have share devices among workers. Instead of being ultra-customized per employee, the headsets could easily be re-assigned to anyone that needs them and deployed without delay.

Unlike some other headset manufacturers, the enterprise customer is the target audience for the HoloLens 2. The see-through headsets are essential for safety, especially in a construction or plant environment, and the intuitive controls are designed to lower the barrier for adoption by workers at any skill level. Combined with their development partners creating applications for specific fields, the HoloLens 2 seems primed to be one of the first headsets to be put into regular use.