While we’ve heard the periodic chatter suggesting that virtual and augmented reality are “done for” as an industry over the last few years, VR and AR development still continues to grow despite the naysayers. In late 2019, SPAR 3D wrote about how VR and AR are becoming more than buzzwords in Construction, and how the enterprise is changing when these technologies are applied to employee training. Also, in a new report by Unity, who claims to power 60% of all AR/VR content, the consensus from various professionals, including Nvidia VR Director David Weinstein, and Varjo CEO Niko Eiden, is that 2020 is shaping up to be a year to remember for XR in the industrial sector.

2020 just kicked off, and the VR and AR industries have seen various introductions of not only new products but also new companies.

Coming in the second half of 2020, the new Vuzix M4000 AR smartglasses are the first Vuzix M-series product to feature a waveguide display, meaning users can see through the display while working. The M4000 uses the company’s previous M400 as a foundation. In that sense, the M4000 features the same Qualcomm Snapdragon XR-1 chipset, and, priced at around $3,000, this new product is also targeting enterprises.

The Vuzix M400 is currently being used by different companies for field services applications, remote support, medicine, automotive, manufacturing, and logistics. For example, Ubimax, a Vuzix partner focused on maximizing companies’ productivity with AR solutions, has over 400 customers working with AR, including Airbus, Audi, BMW, DHL, Liebherr, and more. 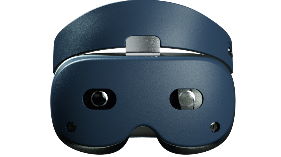 Designed for surgeons, engineers, researchers and developers, the Lynx-R1 is a new XR headset from Lynx Technologies, a French startup in Paris.

As one of the first XR headsets to use Qualcomm’s Snapdragon XR2 chipset, the Lynx-R1 “is the very first untethered video see-through Headset for Mixed Reality”, the company claims. It features dual 1600×1600 LCD at 90Hz displays, 6DoF tracking, hand and eye–tracking, and around 2 hours of active use. Also, Lynx is using a 4-fold catadioptric freeform prism with a micro-lens at the center, where the eye-tracking sensors are located. According to Stan Larroque, from Lynx, some pixels at the center of the screen are duplicated to super sample the image.

“The cool thing with this lens is not only about the optical performance we get but also about the form factor, and the fact that we can hide things right at the center,” Larroque said.

Set to release in summer 2020 for $1499, the Lynx-R1 is now available for pre-order for $150. The first public hands-on demos of Lynx will occur during AWE USA at the end of May in Santa Clara. 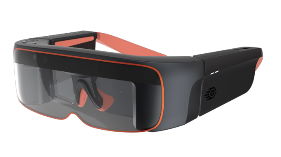 Available for purchase at $1,950, the X2 Mixed Reality smarglasses from ThirdEye weigh 300 grams only. Featuring a 42-degree field of view, dual 1280×720 see-through displays at 60 FPS, noise–canceling microphones, thermal, ambient light and flashlight sensors, and a 13-MP camera, the X2 aims to improve the quality of work and performances for companies across all industries, including field services, healthcare, manufacturing, aerospace, architecture, education, and insurance.

“Mixed reality is changing the way employees work in the enterprise, allowing them to have the information they need right in front of their eyes,” said Nick Cherukuri, Founder of ThirdEye. “With our X2 MR Glasses, companies are saving nearly 40 percent in productivity improvements, and with our software partnerships, we believe the savings will only increase.”

Built into the X2 smartglasses, ThirdEye Workspace includes advanced AR/MR capabilities, such as live AR remote help, to connect with experienced field experts that can see what the user is seeing and annotate on their display in real–time, and 3D SLAM based CAD modeling and overlay, to generate 3D scans of real objects and project 3D overlays into the field of view.

Recently, ThirdEye partnered with Atheer, the developer of an AR Management platform for the enterprise, to transform how car repairs at dealerships will be handled going forward. Also, another partnership with ManoMotion, a computer vision-based software company, will bring gesture recognition to the X2. 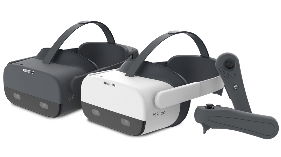 Built with business in mind, the new All-in-One solution from Pico brings two new 6DoF VR headsets to the table, the Neo 2 and Neo 2 Eye, with the latter including eye-tracking. Both models incorporate Qualcomm’s Snapdragon 845 chipset, feature a 4K, 101 FOV, 75 Refresh display, and weighs around 340 grams.

In late Q1, the Neo 2 will include Firefox Reality, an open, accessible and secure browser built specifically with VR in mind to create the best possible web browsing experience, and Hubs by Mozilla, to allow users to collaborate online around virtual objects, spaces, and tasks without leaving the headset.

Pico has been in the game for a few years now, and has established an Enterprise Management program to provide an added layer of custom support and technical resources designed for businesses, including AAA Support for direct connection with the development team, and flexible logistics and device customization (loading screen, firmware, etc.) options.

Is this the year of AR and VR?

Every year, for the last three or four years, we pose the question “Is this the year of AR and VR?”. Indeed, there hasn’t been a wide adoption of the technology yet, be it on the consumer or commercial side. However, every year, we do see advancements in both technologies, and not necessarily minor ones. So, what if every year is ‘that’ year?