Matterport is a well-known name in photogrammetry-based 3D reality capture, producing detailed 3D models of interior spaces via their cameras and processing software. Their newest announcement – described by the company as a “breakthrough” – introduces a new means of creating, editing and sharing high-fidelity digital twins of interior spaces via mobile devices. The new Matterport Capture app (which can be found on the Apple Store) allows iOS phones and iPads to perform the scanning process, even without the aid of lidar found in the latest iPad pros.

Last year, Matterport teased this development when they announced exciting AI-driven capabilities that allowed 2D measurements on 3D scans to be made within the viewer itself, as well as annotations and other improvements for sharing the scans without the need for specialized software.

The Matterport Capture app allows users not just to view the scans that have been taken with professional hardware, but allows the iPhone or iPad to be the capture device. Users can start with several different options for scans, depending on their needs. The scan can be either “simple” which limits the amount of time spent on the floors and ceilings of a space, or a “complete” scan which captures a fuller scan including the floor and ceiling. The app can also be used to create a high-quality seamless 360 degree image. For some later model iPhones, their ultra wide depth of field can capture more of the scene even in a simple scan. 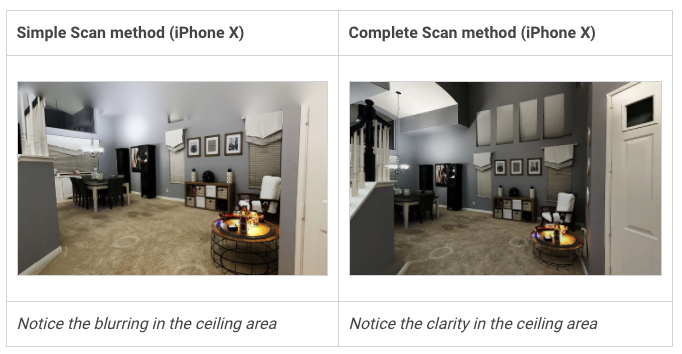 The back-end of this system is driven by Cortex, which is Matterport’s AI platform and deep learning neural network. It ingests information from Matterport’s camera or other third-party scanners and lidar cameras, and can now take in similar data via cell phones or other handheld consumer devices. Cortex’s main task – which it performs amiably – is to take the 2D images captured via these means and reconstruct them into 3D. In addition to the stitching and processing, the colors are corrected, and structure is setup for annotation and measurement. 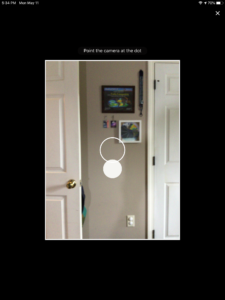 I tested Matterport Capture in my home office with an older iPad, and the process was as straightforward as taking a 360 degree photo in other phone camera applications. On-screen tips about how to stand and how to move (with elbows tucked in, and standing fairly stationary as you rotate to each point) came up during my first scan. A white dot appeared on screen that I was tasked with lining up with a corresponding ring. Once the photo was taken, a new dot would appear for me to hit my next target.

In total, to get my somewhat L-shaped home office space, I took the “complete” scans from five separate locations within the room. After scanning, the software asked me to identify any areas that are windows or mirrors, which I did (marked in red below). 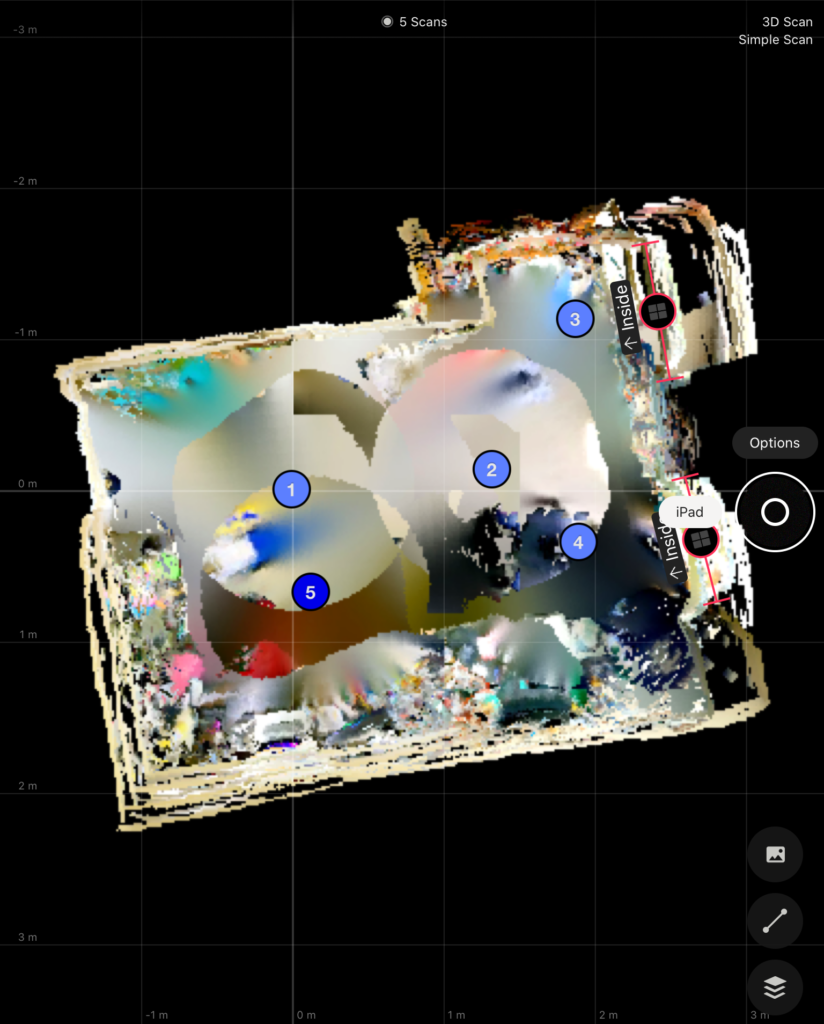 After you’ve finished the scan, you then upload it to the cloud for processing. Later that afternoon, I received the email that my scan was finished, and I was able to open the full model of my office. The results were impressive, even for a quick scan. I could read the names of books on my bookshelf, there were no gaps, holes, or odd geometric artifacts, and the lighting was OK despite the challenging situation of having two windows open at the same time. If I did this again, I’d do it with the windows shut just to get more even lighting. 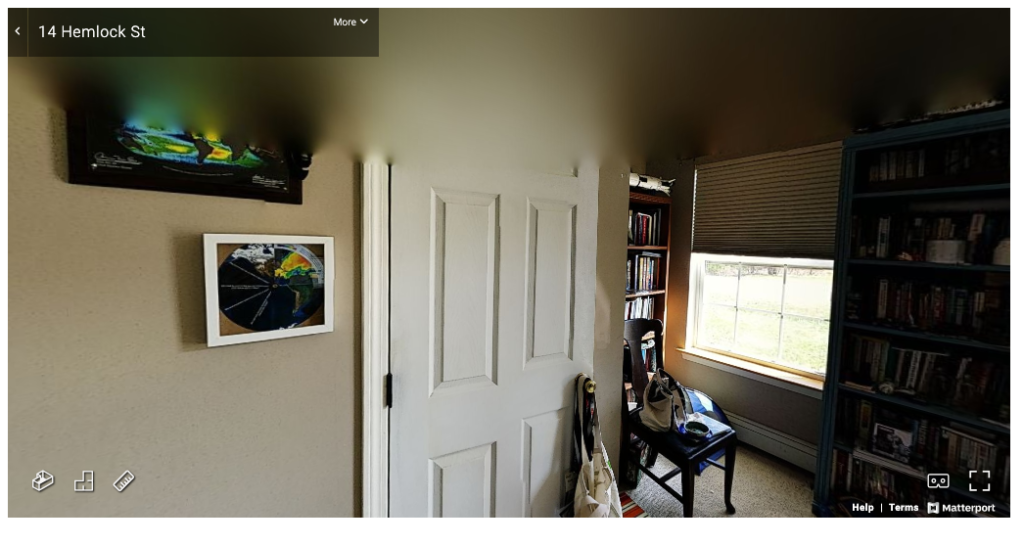 While I don’t have any other scanners at home to compare it to, I did have a tape measure to test its measuring ability. I was slightly surprised to see that the measuring tool rounded up to the nearest inch. I assume that for rough measurements (e.g., will my new desk fit through the door frame, etc.) that would be adequate. I’m not sure if this is a setting or just a limitation of accuracy. 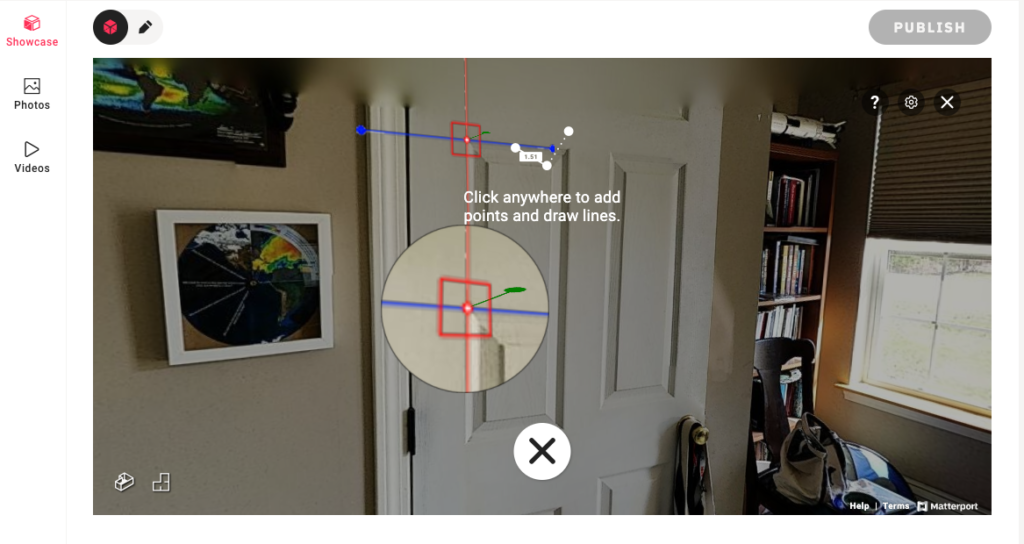 Broadening the use cases for 3D Scanning

Matterport seems to be positioning this as a tool that can reach even broader audiences than the professional 3D scanning and lidar users. For real estate agents, this can be a simple avenue to creating a virtual tour of a space, and potential homebuyers can even measure rooms to see if their furniture might fit. Beyond the real estate applications, however, are a suite of new ones waiting to be discovered.

Could home improvement companies or even professional contractors use scans provided by their clients rather than scheduling in-person visits just to make measurements for estimation? Businesses could easily create maps of their offices to help with wayfinding, or to show potential employees what the office looks like – again, without physically arriving. Perhaps it could be used in heritage preservation in spaces where spending a lot of time might be difficult, or for visiting researchers to capture rooms or areas of interest to take back home to examine.

The lowered barrier to creating these interactive and measurable/annotatable products brings the use cases to a wider group, and it will be interesting to see what unique applications can be found for this technology once it gets into the hands of other business verticals. It may even be particularly useful to get feedback on construction or renovation projects with social distancing limiting the number of people that can be onsite at once.

To RJ Pittman, CEO of Matterport, getting Matterport scans into the hands of more users is the logical next step.

“With billions of square feet captured in more than 80 countries, Matterport has created the standard for 3D capture to digitize the built world. Today marks our first step to empower billions of smartphone users to try Matterport for themselves.”

The app itself is free to download, and it comes with one “active space” per account. A space can be an entire house or building comprised of multiple scans, but it would be limited to one location (and one upload). A tiered pricing structure has been announced that starts at $9.99/month to host up to 5 different spaces, and professional accounts with added features going up from there. 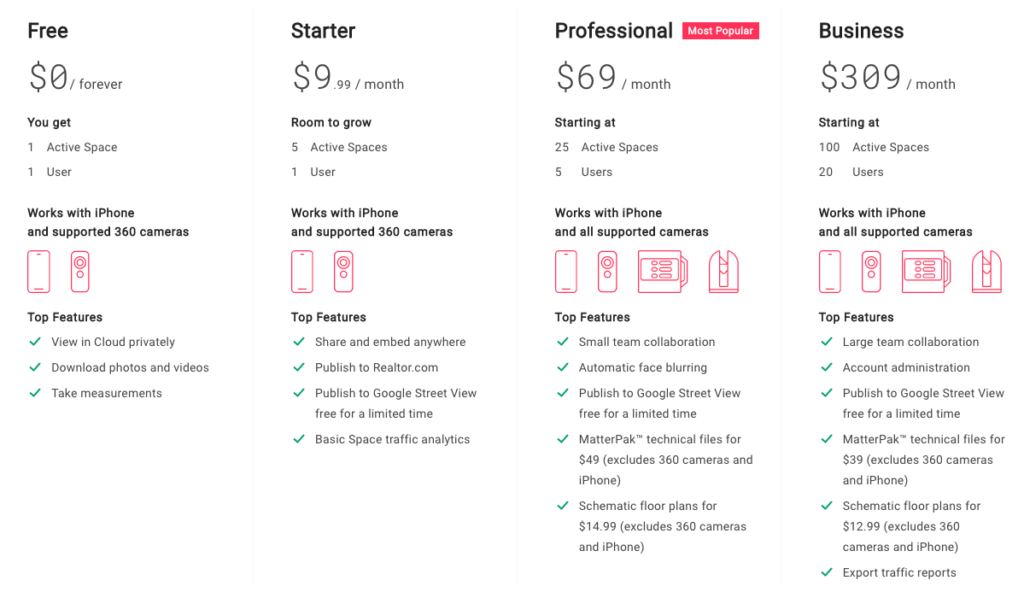 On SPAR 3D we’ve covered the development of several mobile apps for performing indoor 3D scans, and earlier this year we saw the announcement from iPad that its newest model would have a built in lidar sensor. The newest announcement from Matterport, however, might have just changed the discussion entirely – their free new 2D to 3D scanning app for iOS bridges the gap between the consumer and professional worlds when it comes to indoor scanning.